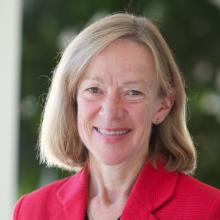 Dr Liz Goodwin is a chemist by background. After an early career at ICI she began to move towards the environmental sector at Zeneca and subsequently Syngenta.

Realising the vital role that care for the environment was likely to have in the future she joined, at its inception in 2001, the Waste and Resources Action Programme (WRAP) as its first Director of Manufacturing and subsequently added the role of Director of Construction.

During her period at WRAP, UK recycling rates increased from 9% to 43% and food waste was reduced by 21% in 4 years.

During the period of her leadership at WRAP ground-breaking collaborative agreements and schemes such as the Courtauld Initiative, Halving Waste to Landfill by the construction sector and Love Food Hate Waste campaigns were born and flourished.

Liz joined the World Resources Institute (WRI) in 2016 as its first Senior Fellow and Director, Food Loss and Waste.

In 2015 Liz was awarded an OBE in the Queen’s Birthday Honours List for services to the Business Resource Efficiency and the Environment.

In March 2017 Liz was appointed Chair of the London Waste and Recycling Board (LWARB) by the Mayor of London.

Tackling Food Waste: Something Politicians Can Agree On

Thursday, March 30, 2017
From my vantage point in a village in the English countryside, party politics in America are certainly eye-catching. The question for any leader looking to break a stalemate is, what areas of common ground can be found? To my mind, there’s a really clear option.

Are You Throwing Away Food That’s Still Safe to Eat?

Tuesday, January 10, 2017
In this season of festive eating — and festive provisioning — we often have a tricky time planning meals, juggling all the things in our fridge and making sure everyone has a good time and enjoys the food we cook. I know that even in my house, all the date labels on food can cause confusion. What’s the difference between them all? Is the food still safe to eat if it’s getting close to one of the dates? Can I use it to feed my friends and family?