Independent Chairperson of the Council at FAO 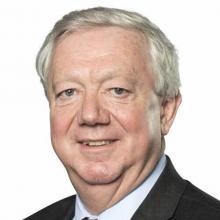 Hans Hoogeveen serves as the elected Independent Chairperson of the Council at FAO. He previously served as Ambassador / Permanent Representative of the Netherlands to the UN Organizations for Food and Agriculture. Before that he was the Director General for Agriculture and Nature Management at the Netherlands Ministry of Economic Affairs. As such, Dr. Hoogeveen was the most senior civil servant to lead the agriculture, agribusiness, food safety, food security, veterinary and plant health, international affairs, including the European Common Agricultural Policy and the Common Fisheries Policy, international food security, the FAO and other UN affairs, trade liberalisation (WTO), market access and nature/biodiversity managements agendas.

Over the course of the last two decades, Dr. Hoogeveen served in numerous international functions, including as Chair of the Bureau of the Seventh Session of the United Nations Forum on Forests that adopted in 2007, under his leadership, an international instrument on forests which was called a landmark achievement by the UN Secretary General after fifteen years of stalled international negotiations. For his achievements within the Forum, Dr. Hoogeveen received an UN award during the High-Level Special Event on the UN General Assembly’s adoption of the international forest instrument.

He is one of the founding fathers of the Global Alliance for Climate Smart Agriculture and the Global Action Network for Oceans and Blue Growth. He also served, amongst others, as President of the Conference of the Parties to the UN Convention on Biological Diversity (CBD) and the Facilitator of the Economic and Social Council of the United Nations (ECOSOC). He was lead regulator in a numerous international processes on behalf of the EU and Netherlands government. Dr. Hoogeveen holds a number of other positions. He serves on several boards, including Yale University’s Governance, Environment, and Markets Initiative, and Forest Trends, a leading International NGO on innovative natural resource policy in Washington, D.C.

Dr. Hoogeveen is Professor of Practice in Natural Resource Policy at the Fletcher School of Law and Diplomacy in Boston. He is also lead lecturer in European Policy at the Netherlands School for Public Government. He received his doctorate degree from Wageningen University, in close collaboration with The Fletcher School. Dr. Hoogeveen also received a law degree in the Netherlands and also holds a master’s degree in Public Administration. He also completed a programme for Senior Managers in Government at the Harvard Kennedy School of Government.

Dr. Hoogeveen has written a number of scientific papers on sustainable development and natural resources, including seminal work on lessons learned from global forest governance.

“Worldwide, food loss and waste impedes food security and fuels climate change. For advancing the agreed 2030 Agenda for Sustainable Development this issue must be tackled today. Food that is ultimately lost or wasted consumes about a quarter of all water used by agriculture, requires cropland area the size of China, and is responsible for an estimated 8 percent of global greenhouse gas emissions. Through their leadership the Champions 12.3 will be able to connect these challenges, by forming smart alliances, bringing together leaders from private sector, local communities, farming, science and government.” — Hans Hoogeveen

The Netherlands’ Work to Reduce Food Loss and Waste

1. Transparency: clarity on waste figures through monitoring
2. Stimulating innovation and research
3. Raise awareness among the consumers and strive for behavioral change through public information.
4. Better understanding of and adaptation of regulation on date marking.
5. Stimulating food donation
6. Addressing the problem of food waste in the EU and worldwide

The Dutch government has actively promoted the cooperation between the Alliance and the Dutch Association of Foodbanks in order to stimulate food donation and to reduce food waste.

Furthermore, we have invested in research in order to set up a monitor system and set up some public campaigns to raise awareness. Also, a special leaflet was made in which date marking was explained towards the industry in order to stimulate them to use date marking correctly.

In order to stimulate innovation and research, a Small Business Innovation Research-scheme with a budget of € 3.15 million was set up in 2010. This scheme, among other things, adapted conventional orders of foodstuffs by restaurants in theme parks by using concrete data and accounting for extraneous factors such as weather conditions and number of visitors. Also, a non-invasive O2 sensor was developed which makes it possible to detect leaky packaging individual so these items can be sorted out instead of a whole batch. Furthermore, reducing food waste is one of the leading topics in the Dutch top sector approach in which more fundamental and applied research is programmed.

In 2015 we hosted the international conference in which the initiative Champions 12.3 was announced. And during the Dutch Precedency (first half of 2016) the Council has adopted conclusions on food loss and waste (FLW).

Despite all these efforts, the amount of food waste in the Netherlands was not significantly reduced. In order to give the battle on food waste a new boost, the Dutch Taskforce on Circular Economy in Food will be launched in early 2017 at the national High Level Meeting on Food organized by the Dutch Government. The Taskforce is initiated in the framework of REFRESH, an EU research project taking action against food waste (Resource Efficient Food and Drink for the Entire Supply Chain). There are Dutch Champions who will support the Taskforce.

The Dutch Government has published several policy letters about their priority theme of food security in the past few years. Reduction of post-harvest losses is one of building blocks of a sustainable food system. As the second largest exporter of agricultural products in the world, the Netherlands has an extensive knowledge and expertise about creating efficiency in agro-food chains. The Post-Harvest Network aims to make this expertise available for partners in developing and upcoming countries. Initiated by the Dutch Ministries of Economic and Foreign Affairs, Wageningen UR, and DINALOG, the Postharvest Network is a multi-stakeholder coalition envisioning a more sustainable and inclusive world in which food losses are minimized. This would result in food security, significant economic savings and gains, and reduced pressure on our environmental resources.

Since its launch in late 2014, the Post-Harvest Network is working towards transformational change: a systems change in paradigms, beliefs and behaviour. The mission of the Post-Harvest Network is to achieve a reduction of food losses – and thus contributing to Sustainable Development Goal 12.3 – by connecting all different actors from the Dutch Diamond, both nationally and internationally, bundle expertise and experience on postharvest losses and help develop sustainable solutions. In this our work looks at not only technical but also organizational and social innovation in the post-harvest food supply chains in low- and middle-income countries. The role of the Post-Harvest Network in this multi-stakeholder approach is to catalyse and facilitate mechanisms that will eventually result in substantial programs for the reduction of post-harvest food losses bringing all relevant stakeholders together in order to implement integrated solutions. Specifically, this can be broken down into creating and facilitating awareness raising on the issue, capacity building in the target countries, technology and innovation transfer from the Netherlands to the target countries and ultimately the redesign of value chains for realizing higher quality and value.

The work ranges from awareness activities to measuring postharvest losses and redesign of value chains and up to policy input creation. Specific examples are a project in India where after an initial analysis of bottlenecks in the banana and tomato chain the chains are redesigned now for implementation of pilots as a next step. Another example is the analysis of important drivers of change in order to reduce food loss and waste.

The Global Conference ‘NO MORE FOOD TO WASTE – Global action to stop food losses and food waste’ was held in The Hague, The Netherlands from 16 to 19 June 2015. It was hosted by the Government of the Netherlands, in close cooperation with the Government of Vietnam, the Food and Agriculture Organization of the United Nations (FAO), the United Nations Environment Programme (UNEP) and the African Union Commission (AUC). The key objectives of the NO MORE FOOD TO WASTE Conference were to: identify areas with potential to trigger action; scale up solutions based on lessons learned and best practices to reduce FLW; highlight innovative approaches for cross-sectoral investment/collaborative financing; and champion active partnerships working to minimize FLW throughout the food supply chain. As a result of the conference, the Netherlands did bring the Champions 12.3 (Friends of No More Food To Waste) to life.

The Global Conference ‘Investing in a Food Secure Future Conference’ was organized by the Government of the Netherlands and co-hosted with the African Union and European Commission. It was held in Noordwijk, The Netherlands, from 4 to 6 July, 2016. The conference brought together participants from governments, international organizations, businesses, investment groups, research institutions and civil society to share their experiences and expertise and to partner in efforts to sustainably transform agriculture in order to achieve food security, improved nutrition, and rural growth. Fighting FLW was one of the main themes and led to several actionable outcomes. For example: UNEP offered to host and mobilize the Community of Practice on Food Waste. And Rabobank committed to intensify their commitment for the Patient Procurement Program. The Netherlands committed to set up two to four Agri-business incubators for Africa with specific attention to reducing post-harvest losses and climate smart agriculture. Preparations have started for exploring the first incubator.

On November 25, 2014, the Agrologistic Forum Egypt was launched at the conference organized by the Embassy of the Kingdom of the Netherlands in Cairo. The assessment report on agro-logistics losses of produce was presented giving specific insights in where the financial losses and losses of volumes occurred.

On October 20, 2016, the side event “Food losses and waste in the context of metropolitan food and nutrition security” took place at the CFS 43 in Rome. It was co-organized by the Post Harvest Network, Wageningen University & Research, CCAFS, the Dutch Ministries of Economic and Foreign Affairs and FAO.

In his new capacity as Permanent Representative to the UN Food and Agriculture Organizations in Rome, Ambassador Hoogeveen is working closely together with IFAD to organize a major event in Rome in the first half of 2017. This high level event will focus on smallholder farmers and specifically look into reducing Post-Harvest Losses.

Reducing Food Loss and Waste: A Vital Solution to the Food Crisis

Addressing Food Loss and Waste in a COVID-19 World