Chairman of the Managing Board, Rabobank 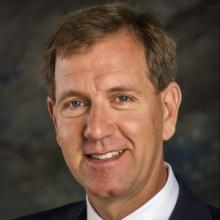 Wiebe Draijer (1965, born in Enschede, The Netherlands) took over as Chairman of the Rabobank Managing Board on 1 October 2014. He studied mechanical engineering in Delft and in 1992 received an MBA from the Insead Business School. From 1990 to 2003, he was employed as a consultant at the McKinsey consultancy firm. In 2004, he was appointed the company’s managing partner for the Netherlands and in 2006 for the Benelux countries. As from 1 September 2012, Wiebe Draijer was appointed president of the Social and Economic Council of the Netherlands. In this role he played a decisive role in the establishment of the Dutch Energy Agreement for Sustainable Growth. Wiebe Draijer is married, with four children.

“As a leading food and agri financier worldwide, Rabobank counts many food producers among our customers. We are committed as a bank to contributing to an improvement of the global food supply by providing these customers access to financing, expertise and networks. We call it: Banking for Food. The objective of this programme is to increase food production and improve food distribution to the benefit of people’s health and the environment. One of our priorities is reducing food waste, because it enables our customers to improve their returns while a more efficient use of raw materials has a positive impact on the environment and the stability of the food supply. Therefore, we happily participate in the global Champions initiative to join forces and raise awareness for the mutually benefitting aspects of food waste reduction.” — Wiebe Draijer

The world population is predicted to grow to nearly 10 billion by 2050. Not only is the population growing, it is getting older and on average wealthier as well. The latter will result in a massive shift towards for example animal protein based diets which can potentially cause a ripple effect throughout international food and agri chains and trade flows. The main challenge in the upcoming decades will be to increase production with less ecological impact, less water, less exhaust, less chemicals, and less arable land per capita.

Rabobank is rooted in agriculture. It was founded by farmers for farmers over 115 years ago. Today, food and agriculture is still at the heart of the bank’s strategy. This is reflected in “Banking for Food;” a vision on a food secure future as well as a strategy outlining the bank’s contribution. Rabobank recognizes that its customers, food and agri business worldwide, play a key role in warranting food security. Rabobank can contribute by providing them with access to knowledge, networks and finance.

To know that 1/3 of the globally produced food is either lost throughout the chain or wasted by end consumers in developed countries while some 800 million people are chronically hungry is unacceptable. Add to that the fact that all the resources required to produce this lost or wasted food are wasted as well and it is obvious that food loss and waste are vital themes within the context of food security and Rabobank’s Banking for Food strategy.

Concrete involvement of Rabobank in food loss and waste reduction can be categorized in four different types of activities:

Structures and policies
Actions we have taken to firmly embed measures against food loss and waste.

– Our Banking for Food Strategy
– Possibly relevant sustainability KPI(s) for the Rabobank employees
– Our own catering policy
– Research policy, for example this year (2017) with a focus on Packaging: Packaging can play an essential role in reducing food waste and our research units – both national and international – will gain more insight for our clients in how this can work

Concrete products will be:

Campaigns and raising awareness
Campaigns we have deployed/are deploying to raise awareness about food waste and loss among staff and general audience.

Putting food waste on the agenda
Events and activities we deploy with the help of our expertise and client base / network to prioritize and accelerate food waste reduction within the food and agri industry, among government representatives, etc.

Business
Incorporating the reduction of food loss and waste in business practices and developing business cases.

– Impact investment loans with EIB (for instance Hutten Catering, Verspillingsfabriek)
– Direct Banking in Australia: by making a direct link between savings and food waste costs:
RaboDirect is encouraging Australian clients to review their spending and food waste habits to make positive changes for the future.
– Rabo Development activities in Africa
– Rabobank Foundation activities in Africa and Latin America
– Matchmaking between different clients via our conferences on for example Bio Economy and Agri meets Chemicals, whereby for example a coffee-roaster is being introduced to a producer of bio-degradable coffee cups
– Facilitate and advise Start-Ups aimed at reduction of FLW, and connecting them to venture capital and investors
– Participation of Rabobank in the Taskforce Circular Economy in Food aimed at Dutch companies and the ambition to let Dutch business become the frontrunner in the realisation of SDG 12.3