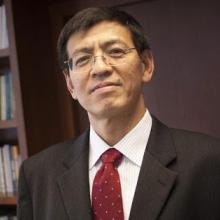 Dr. Shenggen Fan is Chair Professor of China Agricultural University and the former Director General of the International Food Policy Research Institute (IFPRI), having served from 2009 – 2019.

Dr. Fan joined IFPRI in 1995 as a research fellow, conducting extensive research on pro-poor development strategies in Africa, Asia, and the Middle East. He led IFPRI’s program on public investment before becoming the director of the Institute’s Development Strategy and Governance Division in 2005.

He now serves as the Vice-Chairman of the World Economic Forum’s Global Agenda Council on Food and Nutrition Security, after serving as Chairman of the Council from 2012 to 2014.

In 2014, Dr. Fan received the Hunger Hero Award from the World Food Programme in recognition of his commitment to and leadership in fighting hunger worldwide.

Dr. Fan received a PhD in applied economics from the University of Minnesota and bachelor’s and master’s degrees from Nanjing Agricultural University in China.

“I grew up on a farm and know what it’s like to be hungry and undernourished. Given the evidence and country-level successes in the past, I know we can end hunger and undernutrition by 2025. Reducing food loss and waste is a critical step toward this and we have partnered with the Food and Agriculture Organization to launch a technical platform, enhancing the measurement of food loss and waste and sharing knowledge to tackle this global challenge. I am honored to be a 12.3 Champion and look forward to working with partners to achieve this goal.” — Dr. Shenggen Fan

Stopping Food Waste
The International Food Policy Research Institute (IFPRI) is a global leader in advancing evidence-based solutions to fight hunger and malnutrition. Reducing food loss and waste is a critical step toward achieving this mission and the Sustainable Development Goals, which is why IFPRI is committed to working together with partners to measure and reduce food loss and waste.

Forging Partnerships
Responding to the G20 agriculture ministers’ call during the Turkish Presidency, IFPRI partnered with the Food and Agriculture Organization of the United Nations and the CGIAR Research Program on Policies, Institutions, and Markets, to launch in December 2015 the Technical Platform on Food Loss and Waste, an online tool for facilitating local, national and regional level food loss and waste prevention, reduction and measurement. The technical platform provides vital information about both the amount of food lost or wasted every year globally, and events where experts convene to share research and best practices.

Building Knowledge
Acknowledging that varying definitions of global food loss and waste have led to inconsistent estimates of the severity of the challenge ahead, IFPRI researchers proposed a new definition – “Potential Food Loss and Waste” – that incorporates loss and waste throughout the value chain, from the field at harvest to the dining room table. IFPRI also suggested a standard methodology for application across disparate crops and region. Our research examined the causes of food loss and waste at a macro and a micro level. Looking at the entire food system, IFPRI’s flagship 2016 Global Food Policy Report included a chapter that examined and explained the primary causes of loss at each step of a typical value chain. On a granular level, Wastage in Food Value Chains in Developing Countries took evidence from the potato sector in three Asian countries to discover that distance of shipment was one of the leading causes of food loss in domestic rural-urban value chains.

Toward a More Sustainable Future
In 2016, IFPRI Director-General Fan was named a “12.3 champion” for the work he and IFPRI have led on reducing food loss and waste and revealing its causes. IFPRI researchers built on the knowledge gained from past study and collaborated with partners to propose food loss and waste solutions at every step of the value chain. Some suggested remedies include the provision of extension services during harvest, improved infrastructure that reduces damage during transport, optimizing portion size for packaging, increased donation of unsold goods in markets, and an end to the practice of discarding so-called “ugly” produce with better consumer education. Adoption of these practices could dramatically reduce potential food loss and waste and set the world well on its way to achieving SDG goal 12.3.