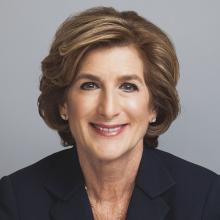 Denise Morrison is the former President and CEO of Campbell Soup Company. Under her leadership, Campbell continued to realize the potential of its purpose, real food that matters for life’s moments. The company is a leader in soup, fresh carrots, refrigerated juice, and organic baby food, with brands such as Campbell’s, Bolthouse Farms, and Plum Organics. It is also a leader in Global Biscuits and Snacks with trusted brands including Pepperidge Farm, Arnott’s, Royal Dansk, and Kjeldsens. Campbell is committed to strengthening its core business while expanding into faster-growing spaces to become the leading health and well-being food company.

Denise has a distinguished track record of building strong businesses and growing iconic brands. She became CEO in August 2011, after more than eight years at Campbell and more than 30 years in the food business. She was the 12th leader in the company’s 148-year history. Denise joined Campbell in 2003 as President-Global Sales and Chief Customer Officer. She then served as President-Campbell USA and Senior Vice President and President-North America Soup, Sauces and Beverages. She was named Executive Vice President and Chief Operating Officer in 2010, and she was also appointed as a Director of Campbell’s board. She retired from her role as CEO in May 2018.

Denise was elected to the MetLife, Inc. board in February 2014. She is also a member of the board of directors for The Consumer Goods Forum and Catalyst, and is a member of the board of trustees for Boston College. Previously, she served on the Export Council for the Obama Administration. She is consistently ranked among Fortune’s 50 Most Powerful Women in Business.

As a company committed to its Purpose, Real Food that Matters for Life’s Moments, Campbell realizes it has an important role to play in being part of the solution to food waste.

For the last 10 years, Campbell has internally tracked the food waste generated in its facilities and has worked to implement a food recovery hierarchy that includes source reduction, donation, animal feed, energy production and composting. This emphasis on tracking and redirecting food waste has led the Company to divert a large portion of its waste and helped it to identify opportunities to reduce waste at the source.

An example of source reduction can be found in Campbell’s Bolthouse Farms operations. The process is designed to make use of the entire carrot. From tip to greens, each inch of the carrot reaches its full potential. Carrots are juiced into fresh beverages, cut and peeled into baby carrots or carrot time savers like Chips and Matchstix. Even the leftover carrot tops are used as fertilizer in the fields.

Campbell’s focus on food waste reduction and efficient use of ingredients has resulted in innovations not only in its plants, but in its hometown communities as well. At its World Headquarters in Camden, NJ, Campbell works with the Food Bank of South Jersey to produce and distribute Just Peachy salsa to local retailers. The salsa is made from peaches that would otherwise be sent to landfill due to bruising or being undersized. All proceeds generated from the sale of the salsa benefit the Food Bank and their nine hunger relief programs. This project has generated approximately $250,000 for the Food Bank since its inception.

Campbell is implementing the Food Loss and Waste Accounting and Reporting Standard to more precisely measure the types of food waste generated in the Company’s operations and the destinations of those waste streams. This will establish the Company’s baseline by which to measure and report on efforts to achieve the Consumer Goods Forum Resolution to halve food waste by 2025.

Campbell is a member of the Food Waste Reduction Alliance and The Consumer Goods Forum Food Waste working group. Campbell is also among the first companies to be a U.S. Food Loss and Waste 2030 Champion.