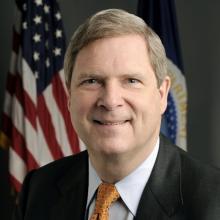 Thomas J. Vilsack was confirmed as the 32nd United States Secretary of Agriculture on Feb. 23, 2021 by the U.S. Senate.

He was nominated by President Joe Biden to return to a role where he served for eight years under President Barack Obama.

As leader of the U.S. Department of Agriculture as the 30th Secretary of Agriculture between 2009-2017, Vilsack worked hard to strengthen the American agricultural economy, build vibrant rural communities and create new markets for innovation in rural America. He fought to put Americans back to work by investing in rural infrastructure, renewable energy and large-scale conservation partnerships. Under his leadership, USDA supported America's farmers, ranchers and growers who drove the rural economy forward, set records for U.S. agricultural exports, provided food assistance to millions of Americans, and helped provide a safe, sufficient and nutritious food supply for the American people. USDA introduced healthier food choices in school meals to benefit 50 million children during Vilsack’s tenure and expanded free and reduced-price lunches for millions of kids.

Vilsack was the longest-serving member of President Obama’s original Cabinet. Prior to his appointment, he served two terms as the Governor of Iowa, served in the Iowa State Senate and as the mayor of Mt. Pleasant, Iowa. He received his bachelor's degree from Hamilton College and his law degree from Albany Law School in New York.

Prior to returning to USDA, he served as president and CEO of the U.S. Dairy Export Council (USDEC) from 2017 until February 2021. There, he provided strategic leadership and oversight of USDEC's global promotional and research activities, regulatory affairs and trade policy initiatives. In addition to his post at USDEC, he also served as a Strategic Advisor to Colorado State University’s food and water initiatives.

A native of Pittsburgh, Penn., Vilsack was born into an orphanage and adopted in 1951. After graduating from law school, Vilsack moved to Mt. Pleasant, Iowa, his wife Christie’s hometown, where he practiced law. The Vilsacks have two adult sons and two daughters-in-law—Doug, married to Janet; and Jess, married to Kate. They have five grandchildren.

Between 2009-2016, USDA enrolled a record number of acres in conservation programs through a new model of stewardship that brought together local, national, public and private partners. USDA also introduced healthier food choices in school meals to benefit 50 million children during Vilsack’s tenure. He expanded free and reduced-price participation in the National School Lunch Program by 19 percent and in the breakfast program by 30 percent, ensuring more low-income children had access to healthy meals each day. To diversify farming operations, he introduced new crop insurance and risk management tools for farms of all sizes.

He built a diverse workforce at USDA. Nonwhite representation increased by 88 percent; USDA’s Senior Executive Service (SES) Corps was the most diverse across the U.S. government; and USDA saw a 140 percent increase in the number of minority students hired. Annual lending to underserved and socially disadvantaged producers increased 118-percent. Under his direction, USDA made important progress to address decades of outstanding civil rights claims and EEO complaints for customers and employees alike. USDA also launched the Office of Tribal Relations and regularly engaged in Tribal consultations with Native American communities.

Vilsack has been honored for his public service and work to advance American agriculture by the several organizations, including the Congressional Hunger Center and the Global Child Nutrition Foundation. He is a former member of the board of directors for GenYOUth as well as Feeding America, a nationwide network of more than 200 food banks that feed more than 46 million people through food pantries, soup kitchens, shelters, and other community-based agencies.

“The United States enjoys the most productive and abundant food supply on earth, but too much of this food goes to waste. An average family of four leaves more than two million calories, worth nearly $1,500, uneaten each year. That’s why we set the United States’ first national goal to reduce food waste by 50 percent by 2030 and are proud to join Champions 12.3 to inspire action globally. Reducing food waste on a global level is key to getting wholesome food to people who need it, protecting our natural resources, cutting environmental pollution and promoting innovative approaches for reducing food loss and waste.” — Tom Vilsack