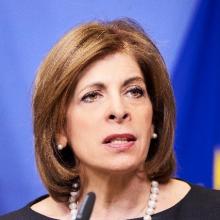 On 1 December 2019, Ms. Kyriakides became the European Commissioner for Health and Food Safety.

In the area of health, she is leading the Commission’s work on Europe’s Beating Cancer Plan to help improve cancer prevention and care, and is in charge of developing a new Pharmaceutical Strategy to ensure that Europe has enough affordable medicines to meet its needs.

Her responsibilities also include supporting Member States in improving the quality and sustainability of health systems, creating a European Health Data Space to promote health-data exchange and support research. She is also in charge of ensuring full implementation of the European One Health Action Plan against Antimicrobial Resistance and working towards a global agreement on antimicrobials.

On food safety, Commissioner Kyriakides is leading the new ‘Farm to Fork’ strategy for sustainable food, covering every step in the food chain from production to consumption. Her responsibilities also include ensuring enforcement of animal welfare laws and promoting European standards globally as well as ensuring enforcement of EU laws on food safety and animal and plant health and leading the work to protect plant health, reduce dependency on pesticides and support low-risk and non-chemical alternatives.

During the COVID-19 crisis, she has been leading the Commission's work to coordinate the EU’s health response and support Member States to tackle the outbreak. This includes working to ensure that essential goods and services can flow freely across borders, essential medicines and medical devices are available at affordable prices, and leading the EU’s efforts to secure access to safe and effective therapeutics and vaccines.

Previously, Ms. Stella Kyriakides worked as a clinical psychologist in the Mental Health Services of the Ministry of Health of the Republic of Cyprus in the area of Child and Adolescent Psychiatry from 1979-2006. In 2006, she was elected to the Cyprus Parliament and was re-elected in 2011 and 2016 for the Democratic Rally party, of which she was the Vice-President.

In 2012, she was appointed Head of the Cyprus Delegation to the Parliamentary Assembly of the Council of Europe (PACE). In 2017 she was elected President of the PACE, thus becoming the 30th President of the Assembly.

She received many awards in recognition of her relentless efforts and work in support of women’s rights, children and patients’ rights and had numerous publications, research contributions/articles on children related matters and cancer in Cyprus and other European countries.