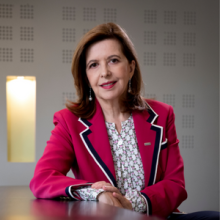 Sophie Bellon has been Chairwoman of Sodexo’s Board of Directors since 2016 and has also acted as Chief Executive Officer since March 1, 2022. Sophie joined Sodexo’s finance team in 1994. In that capacity, she contributed to the successful integration of Gardner Merchant in the United Kingdom and Marriott Management Services in the United States, two strategic acquisitions that consolidated Sodexo’s international scope and contributed to twice doubling the Group’s revenues.

Following these acquisitions, Sophie became Head of Operational Management Control in 2001 to improve and streamline financial performance monitoring of the various subsidiaries. She defined and implemented common performance indicators, which are still in force today. She was appointed Group Client Relations Director in 2005 and contributed to the significant increase in the client retention rate. This strong internal client culture is part of the Group’s fundamentals and plays a key role in Sodexo’s rapid growth; revenues increased by nearly 50% between 2005 and 2015.

In 2008, Sophie became Chief Executive Officer of the Corporate Services business unit for Sodexo France. In 2010, she also became Head of Facilities Management activities in France. In 2013, Sophie took overall responsibility for Sodexo’s Research, Development and Innovation strategy. That same year, she was appointed Vice Chairwoman of Sodexo’s Board of Directors, of which she has been a member since 1989.

A strong advocate for the service industry, Sophie is committed to ensuring that its social value and its impact at the local level are recognized. Deeply concerned with the human aspects of these professions, she also drives diversity and inclusion, both within the company and throughout the community, and in particular gender equality, which she sees as an essential lever for creativity, innovation and performance. In 2019, she chaired a task force on the employment of senior citizens, at the request of Edouard Philippe, then Prime Minister of France.

Sophie has been a member of the Board of Directors of L’Oréal since 2015, and of the AFEP (the French Association of Private Enterprises) since 2017, and of Catalyst since 2022. Prior to joining Sodexo, Sophie spent eight years in the United States, working in, among others, M&A and the fashion industry. With this experience, she built a strong bond with and understanding of the American culture, which she still feels close to today. Sophie is a graduate of EDHEC Business School.

Working across the board

Whether it’s during the ordering, storage, preparation, or serving process, we are working together with our teams, clients and suppliers to reduce food and collateral waste at across Sodexo sites.

In United Kingdom, as part of our commitment to prevent unnecessary food waste, Sodexo has launched Wasteful to Tasteful to help reduce the volume of grade B* fruit and vegetables being thrown away or left to rot.

With over 30% of crops never leaving the farm Sodexo has joined forces with Waste Knot, an organisation committed to connecting businesses with surplus food and Ferryfast, a co-operative of farmers in Worcestershire, to introduce boxes of rescued fruit and vegetables, delivered in recycled banana boxes to Sodexo’s catering teams across the country.

For Sodexo, the fight against food waste is part of our daily routine. The WasteWatch powered by Leanpath Program prevents on average 50% of food wasted. Using the program, Sodexo teams can rapidly and easily capture food waste data, giving clear insights into what is being wasted in their kitchens and why. With this new understanding, teams can implement targeted operational and behavioral changes to help end avoidable food waste, whether food waste generated in the kitchen or consumer food waste. In June 2019, Sodexo announced the deployment of its data-driven food waste prevention program, WasteWatch powered by Leanpath, at 3,000 sites worldwide within a year.

We are training our teams to be sustainably minded and have developed training and personal development programs to empower employees, customers and clients to waste less by celebrating the benefits of conserving food, water, energy, paper and raw material. In 2018, more than 3,500 Sodexo sites in 47 countries took part in the WasteLESS Week annual campaign, an effort to promote the importance of reducing the waste of resources and simple actions all can take. The five-day campaign engages Sodexo teams, clients and consumers to

participate in waste prevention actions such as reducing water, food, energy and paper waste and encouraging recycling. Education and training activities such as WasteLESS Week are helping to ensure that integrated waste management will be a core part of each site’s overall management practices.

For the past 20 years, Sodexo has been supporting the fight against hunger and malnutrition through Stop Hunger. While Sodexo teams make every effort to eliminate food waste at the restaurants, with the support of stop Hunger, we offer the daily surplus to local associations or NGOs for redistribution to those in need.

In France, Stop Hunger and Sodexo chose the French Federation of Food Banks and Restos du Coeur to support the redistribution. In 2018, 95 tons of food surplus have been offered.