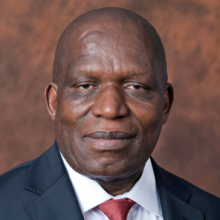 Senzeni Zokwana is former Minister of Agriculture, Forestry and Fisheries of the Republic of South Africa, serving in this position from 2014 – 2019. Mr. Zokwana previously served as the president of the National Union of Mineworkers (NUM).

Mr. Zokwana was elected as vice president of NUM in 1994; a position he held until 2000 when he was elected president. He was subsequently, re-elected for the role and held the position until he was appointed as Minister by President Jacob Zuma.