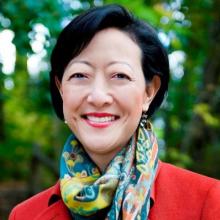 Rhea Suh is former president of the Natural Resources Defense Council (NRDC), a position she held from 2014 to 2019. NRDC has been a leader on the issue of food loss and waste, publishing touchstone reports on food loss and waste in the United States and food date labels. In 2016, NRDC is launching a major public awareness campaign to engage consumers in saving more food in their homes.

Before joining NRDC, Suh served as the assistant secretary for policy, management, and budget at the U.S. Department of the Interior. Suh was nominated for the position by President Barack Obama and confirmed by the U.S. Senate in 2009. Prior to her appointment to the Department of Interior, Suh worked at The David and Lucile Packard Foundation, where she created and managed a $200 million program dedicated to environmental conservation and clean energy in the West.

Suh earned a B.A. in Environmental Science from Barnard College and a Master’s of Education, Administration, Planning and Social Policy from Harvard University.

“All the sustainable agriculture in the world won’t do us much good if the food never gets eaten. Wasted food means wasted water, energy, land and money. And it’s a moral tragedy to have food wasted alongside the hunger that still exists throughout the world today. In the U.S. alone, we throw out 40 percent of our food supply. We can and must do better.” — Rhea Suh

The Natural Resources Defense Council (NRDC) is working to reduce food loss and waste on a number of fronts across the United States:

With Consumers
In 2016, NRDC launched Save the Food, a national media campaign in partnership with the Ad Council. The campaign, which consists of online/TV videos, radio ads, outdoor advertising, digital content, and a resource website, has already received over $10 million in donated media space and over 12 million online views. The campaign will continue to develop new assets and content, which are free to any entity in the US. NRDC Senior Scientist Dana Gunders has also published a more detailed consumer guide to reducing food waste called the Waste-Free Kitchen Handbook.

With Cities
NRDC is working with cities to create long-term, holistic approaches to tackling food waste that incorporate prevention, food donation, and recycling strategies. We are analyzing residential and commercial waste, as well as the amount of food that could be recovered, in Nashville, Tennessee, Denver, Colorado, and New York City. We are also developing a City Food Waste Reduction Toolkit with recommended policies and programs. In addition, we are working with local government and community organizations in Nashville and New York City to implement model policies and programs.

With Federal and State Government
NRDC played a role in achieving national targets to reduce food waste by 50% by 2030, and is now encouraging and advising implementation of these goals. Through Congressional testimony, White House briefings, co-sponsoring of bills, sign-on letters, and other advocacy, we are working at both the federal and state levels to promote policies that would lead to less wasted food, such as standardizing food date labels, enabling value-add processing on or near farms, expanding liability protections for food donations, and providing funding mechanisms to support food waste reduction efforts.

With Food Date Labels
NRDC co-authored The Dating Game report in 2013 that broke the news of how much confusing food date labels were leading to household food waste. We have since been working directly with companies, with industry associations, and with lawmakers to establish a system of standardized, clear labels. With Walmart and the USDA already moving in that direction, we anticipate that 2017 will be a year of movement towards this goal.

With Thought Leadership
Since our landmark report Wasted was published in 2012, NRDC has been one of the leading organizations on the issue of food waste in the US, playing a significant role in providing information and guidance on the topic, driving public conversation and media buzz, spreading the word through speaking engagements and guiding a variety of related efforts, such as ReFED. We will continue to play this role as the field grows and we gain more and more collaborators.