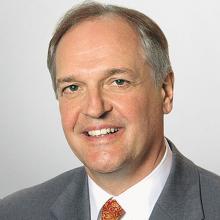 Paul Polman served as Chief Executive Officer of Unilever from 2009 to 2018. Under his leadership Unilever set out an ambitious vision to decouple its growth from overall environmental footprint and increase its positive social impact.

Paul actively sought cooperation with other companies to implement sustainable business strategies and drive systemic change. He is Chairman of the World Business Council for Sustainable Development, a member of the International Business Council of the World Economic Forum, the B Team and sits on the Board of the UN Global Compact.

Paul has been closely involved in global discussions on the Sustainable Development Goals (SDGs) and action to tackle climate change. In 2016, Paul was asked by the UN Secretary-General to be a member of the SDG Advocacy Group, tasked with promoting action on the 2030 Agenda. Prior to this, Paul served on the High Level Panel on the Post-2015 Development Agenda, presenting recommendations on behalf of the private sector. Paul is a member of the Business and Sustainable Development Commission. He also served on the International Council of the Global Commission on the Economy and Climate, under former Mexican President, Felipe Calderon.

In recognition of his contribution to responsible business, Paul has received numerous awards including Ordre national de la Légion d’honneur (2016), UN Foundation’s Champion for Global Change Award (2014), the Oslo Business for Peace Award (2015) and the UN Environment Programme’s Champion of the Earth Award (2015).

“It cannot be right that almost a billion people suffer food insecurity while we waste a third of the food produced. The Champions 12.3 coalition will drive collective action on food loss, waste and associated greenhouse gas emissions to meet the ambition set out in the SDGs and Paris Agreement in 2015.” — Paul Polman

In 2015, the world agreed to a roadmap to eradicate poverty and tackle climate change, giving us the framework and momentum to deal with the greatest challenges of our time. It provides us with an once-in-a-lifetime opportunity to create a zero hunger, net zero carbon emissions and zero poverty world and a brighter future for all.

The global food system is at the centre of this opportunity. In order to achieve the Sustainable Development Goals (SDGs) and Paris Agreement, we need to provide adequate nutrition to the world’s ever-growing population and increase livelihoods for small-holder farmers, in a climate-stressed world. To deliver this, we need a total redesign of our global food system, to one that is productive, sustainable, nutritious and resilient, and one where we better connect production and consumption.

The world produces enough food to feed everyone, yet there are still 870 million people who go to bed hungry every night. This is one of the greatest injustices of our time. One of the reasons for this is that one-third of food produced is lost or wasted. If we tackle food waste, we can create a food system which is more efficient, resilient and sustainable, and thereby encourage a more equitable pattern of consumption.

As a food manufacturer, at Unilever, we are committed to reducing food waste and loss in our supply chain. As signatories of the Consumer Goods Forum Resolution on Food Waste, we pledged to halve food waste in our operations by 2025, and contribute to the SDGs by helping both consumers and suppliers reduce food waste. This commitment is aligned with our long-standing efforts to reduce our manufacturing waste, which include not only food waste but all waste. In January 2015, we sent zero waste to landfill across all of our factory network, and by the end of 2015 we had expanded this achievement to an additional 600 sites through our supply chain, including warehouses, distribution centres and offices.

We are also helping our suppliers address food loss and waste. By providing training to our smallholder farmers, we are helping them understanding how to improve harvesting techniques, so that less food stays on the field. One example is our Kissan ketchup, which is not only 100% sourced from local smallholder farmers in Nasik, India, it also uses tomatoes which would have gone to waste. We also recognise that we can support consumers in their efforts to reduce food waste. For example, in the UK, in partnership with Hubbub, we launched a Joint Ambition for a Zero Food Waste Britain, which is a long-term, nationwide campaign to inspire British families to make the most of their food and reduce avoidable food waste.

We understand that we cannot solve this problem alone. Partnerships with other organisations are critical. For instance, in 2015, Unilever reached more than four million people through our partnerships with local food banks and hunger relief organisations. We have also pledged our support to the UN Zero Hunger Challenge, which has food waste as one its focus areas.

For Unilever, the environmental, social and economic case for reducing food waste and food loss is clear. The road to action is clear. What is also clear is we have no time to waste, and that we must take collective action to create a world with zero hunger, zero poverty and net zero carbon emissions.

For more information about our food waste initiatives click here