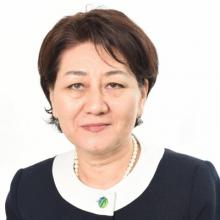 H.E. Oyun Sanjaasuren is Director of External Affairs for Green Climate Fund, and former Chair of the Global Water Partnership and a Member of the Parliament of Mongolia. She was elected first in 1998 and re-elected in the terms of 2000, 2004, 2008 and 2012. She served as Minister of Foreign Affairs during 2007-2008 and Minister of Environment and Green Development during 2012-2014.

During the term of 2004-2008, she respectively held the positions of Vice-Speaker of the Parliament, Leader of the Democratic Coalition Parliamentary Caucus and Chairman of Sub-Committee on Millennium Development Goals and poverty reduction.

Oyun is the founder and the leader of the Civil Will Green Party of Mongolia. She also heads the Zorig Foundation, a prominent Mongolian NGO that is widely known through its activities and programs for advancement of democracy, promotion of good governance, youth and education, as well as community development. Oyun contributes actively to the cause of children with disabilities as the Chair of Special Olympics Committee of Mongolia.

She holds a PhD degree in Earth Sciences from Cambridge University, UK and pursued a career in the mining industry before joining politics.

Early Beginnings
As an Eisenhower fellow in 2003, Oyun Sanjaasuren was already focused on food loss and waste. In her contribution to the 50th anniversary fellowship publication, she wrote on food loss and waste in her native Mongolia. While early in her career, this essay set a clear tone for her work in the years to come, and helped bring the issue to the forefront before her involvement in politics.

President of UNEA
While serving as the first President of the United Nations Environment Assembly, she consistently worked to reduce food loss and waste through the effective implementation of international agreements. At the Second Session of the United Nations Environment Assembly (UNEA 2) in May 2016, she sought to deliver on the ambitious environmental goals set out in the 2030 Agenda for Sustainable Development.

She has championed of SDG Target 12.3 in particular – noted in her organization of an official and highly successful side event on halving global food loss and waste by 2030. Also at UNEA 2, she worked with the Mongolian government to draft and submit a resolution, which was ultimately approved, to the United Nations on waste and chemicals management, which touted the importance of reducing food loss and waste.

Also at UNEA 2, environment ministers from around the world agreed to a resolution calling on governments to implement national food loss and waste reduction programs, participate in efforts to improve food loss and waste measurement, and share technical know-how to advance progress.

Speaker Engagements and Advocacy
Today, she continues to advocate for targets, measurement and action to reduce food loss and waste. As both a keynote speaker and panelist, she has advocated the importance of achieving SDG Target 12.3 from a variety of perspectives. From the United Nations General Assembly to the First Green Business Forum to World Water Week and her position as Chair of the Global Water Partnership, she continues to explain the far-reaching implications of food loss and waste to novel groups and to recruit new actors in the fight against food loss and waste.

Tuesday, June 7, 2016
I would like to welcome you all to the UNEA side event “Champions 12.3: Halving Food Waste and Reducing Food Losses by 2030.” Today we hope to inspire you, your government, your company, or your institution to take bold action to reduce food loss and waste.  And for those in the room representing environment ministries, we will call on you to collaborate to pursue the SDG target on food loss and waste.