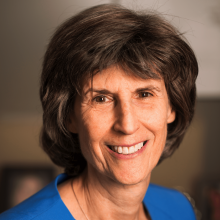 Laura Tuck formerly served as the World Bank’s Vice President for Sustainable Development from 2015 to 2020. Her practices covered Agriculture; Climate Change; Environment and Natural Resources; Social, Urban, Rural and Resilience and Water. In addition, between 2015-2018 her responsibilities also included Energy and Extractives, Transport and Digital Development and Public Private Partnerships. She was responsible for lending, technical assistance, sector policy and dialogue, and analytics in areas covered under sustainable development.

Before taking this position, Ms. Tuck was the Vice President for the Europe and Central Asia (ECA) region.

Prior to that she was Director for Sustainable Development in ECA (2002-2006) and in Latin America (2006-2011) and then Director of Strategy and Operations in the Middle East and North Africa (MNA), followed the same position in ECA.

Ms. Tuck joined the World Bank in 1987 as a Young Professional, and worked as an Economist in MNA and then ECA, and as Sector Manager for Agriculture and Rural Development.

Before the World Bank, Ms. Tuck worked for several consulting firms in agricultural and food policy, and on the faculty of Princeton University as part of a university research project. She worked and lived in Africa between 1980 and 1987.