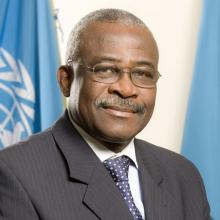 Kanayo F. Nwanze is former President of the International Fund for Agricultural Development (IFAD), which is dedicated to ensuring that agriculture is a central part of the international development agenda, and that governments recognize the concerns of smallholder farmers and other poor rural people. He has been a member of the World Economic Forum’s Global Agenda Council on Food Security since 2010. He was previously Director-General of the Consultative Group on International Agricultural Research (CGIAR) Africa Rice Center for a decade, where he was instrumental in introducing and promoting New Rice for Africa, or NERICA, a high-yield, drought- and pest-resistant variety developed specifically for the African landscape.

Nwanze graduated with a Bachelor of Science in Agricultural Science from the University of Ibadan, Nigeria, and has a Doctorate in Agricultural Entomology from Kansas State University. He has also received honorary degrees from McGill University, Canada, and the University of Warwick, United Kingdom, as well as numerous honours and awards from governments, and national and international institutions. He has published extensively, is a member of several scientific associations and has served on various executive boards.

“To ensure food security for every child, woman and man, we must intensify food production while at the same time address the problems of distribution, and end shocking levels of food spoilage and loss. To do this we must give smallholder farmers the tools they need such as safe storage facilities so they are not forced to watch their harvested crops be eaten by pests or spoil in un-insulated sheds. In addition, they need roads that can withstand more frequent and extreme weather as well as electricity, clean water, links to markets and information. At IFAD we believe that if smallholder farmers are given the right tools, not only will they feed themselves and their communities, they can significantly contribute to global food security.” — Kanayo Nwanze

Dr Kanayo F. Nwanze is the President of the International Fund for Agricultural Development (IFAD) – a specialized United Nations agency dedicated to rural poverty eradication in developing countries through investments in smallholder agriculture and rural development.

In developing countries, up to a third of food is lost before it gets to market. This is caused by a combination of inadequate infrastructure, equipment and capacities at every stages of the value chain from harvesting and storage to transportation and packaging. Grain losses in sub-Saharan Africa alone are worth up to US$4 billion a year – enough to provide the minimum food requirements of at least 48 million people. Coordination failures between the different actors involved in any given supply chain can further increase the likelihood of food losses. IFAD’s expertise in rural development and its close connection to rural farmers and producers makes it particularly well placed to respond to this.

IFAD’s investment portfolio directly addresses the causes of food loss through its value chain development projects. Since 2013, IFAD has allocated more than US$368 million to improve post-harvest infrastructure that is essential to get food to market (including roads, collection centres, storage warehouses and processing and packaging facilities) and for the provision of equipment that minimizes loss at all stages of the food supply chain. In total, at least 11 per cent of IFAD expenditure approved since 2013 has been allocated to post-harvest infrastructure and equipment, accompanied by training for farmers, farmer groups and value chain operators on post-harvest techniques and the operation, maintenance and management of equipment to ensure sustainable food loss reduction.

In Timor Leste, for example, the annual “hungry season” when food is hard to come by lasts more than five months – yet farmers lose up to 30 per cent of their stored maize every year to rodents and weevils. The IFAD-supported Timor-Leste Maize Storage Project distributed almost 42,000 airtight storage drums, paid in part by the farmers who received them, along with training in their use and maintenance. Farmers who used the drums to store their grains reduced their losses to less than one per cent. These farmers could therefore access up to a third more food – equivalent to about 360 kilograms of grain per farming household – without increasing their production, potentially halving the duration of future “hungry seasons”. The anticipated increase in their annual incomes is nearly 300 per cent.

Other types of interventions financed by IFAD indirectly address food loss, such as the dissemination of market and weather information, research on new crop varieties and quality assurance systems. In fact, almost all of IFAD’s investments in value chain development contribute to food loss reduction by improving the overall efficiency of food supply chains.
IFAD is also collaborating with sister agencies the Food and Agriculture Organization (FAO) and the World Food Programme (WFP) on two joint projects that focus on food loss, funded by the Swiss and Irish governments respectively. In particular, IFAD is conducting several country-based food loss assessments while contributing to compiling, disseminating and implementing good practices in post-harvest management as part of the Community of Practice on food loss reduction.