Chairman of the Board, Kellogg Company 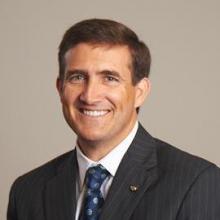 John Bryant is the Chairman of the Board of Kellogg Company, having served in this position since July 1, 2014. In this role, he also chairs the Executive Committee of the Board. Mr. Bryant was named President and Chief Executive Officer in January 2011 and stepped down from this position in October 2017. He has been a member of Kellogg Company’s Board of Directors since July 2010.

Mr. Bryant received a degree from the Australian National University and an MBA from the Wharton School of the University of Pennsylvania.

Mr. Bryant serves on the Board of Directors of W.K. Kellogg Foundation Trust, Catalyst, The Consumer Goods Forum, and Macy’s, Inc.

“Kellogg has reduced waste sent to landfill by more than 60 percent since 2005, including food waste, and remains committed to ensuring edible food waste is donated to feed people in need, when appropriate. Hunger relief is our signature cause, and since the 2013 launch of our Breakfasts for Better Days program, we’ve provided more than 1.4 billion servings of cereal and snacks to those in need, and are committed to doing more in the months and years to come. We also will continue our partnerships to develop sustainable agriculture programs with smallholder farmers helping prevent post-harvest loss in major ingredients relevant to Kellogg.” — John Bryant

As a global food company, we believe we have a significant role to play in helping to end hunger, achieve food security, improve nutrition and promote sustainable agriculture. We will do our part to halve per capita global food waste at the retail and consumer level, and to reduce food losses along the production and supply chains including post-harvest losses by 2030.

We contribute towards this in three important ways:

FARMS: Working to eliminate post-harvest loss so that more of the food which is grown is consumed.

We are working with partners to develop and promote post-harvest loss reduction practices in major ingredients relevant to Kellogg by developing sustainable agriculture programs with smallholder farmers. Currently, we are working with partners to achieve this in India, Bangladesh, South Africa, Thailand, Philippines and other countries which promote and improve post-harvest loss reduction. For example, in the Philippines, we are partnering with the International Rice Research Institute (IRRI) and the Philippines Department of Agriculture to fund work to improve agronomic practices. And in Thailand, we are working to reduce post-harvest loss while increasing yields by 25 percent through identifying sampling points within our processing operations.

MAKING OUR FOOD: Working to eliminate food waste in our processes, capturing it instead to feed people in need, and when that use is not appropriate, ensuring it is used for animal feed.

We are now working to increase to 30 percent the number of our plants sending zero waste to landfill by the end of 2016. Currently, less than 6 percent of waste goes to landfill. Edible food waste is donated to feed people in need; and in any cases where that use is not appropriate, it is used for animal feed. As one example, our facility in Queretaro, Mexico, has reduced their waste to landfill by almost 25 percent during 2015, thanks in part to ongoing training, a focus on reuse before recycling, and composting both cafeteria and garden waste. Also in 2015, Kellogg piloted the Food Loss and Waste Accounting and Reporting Standard, including tracking all seven elements of food waste across our global facilities; animal feed, bio-recycling, composting, incineration, land application and landfill.

OUR COMMUNITIES:Through our global Breakfasts for Better Days™ signature cause, working to assure our food helps those in need either due to natural disasters or chronic hunger in communities we support around the world.

In 2013, Kellogg Company launched Breakfasts for Better Days (BFBD), our global signature cause with a commitment to provide 1 billon servings of cereal and snacks to those who need it most around the world by the end of 2016. Through Breakfasts for Better Days™, we set a goal to provide 1 billion servings of cereal and snacks—more than half of which are breakfast—to people in need around the world by the end of 2016. By the end of 2016, we will have donated nearly 2 billion servings through increasing participation in school breakfast programs and donating our foods to food banks.

We continue our support in the face of serious societal challenges to address hunger through the end of our 2016 commitment, and will be announcing next generation commitments to expand this work into 2017 and beyond.