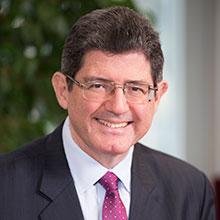 Levy contributed to the international dialogue on financial standards and best practices, primarily through his representation of the Group at the Financial Stability Board. Levy joined the World Bank Group in February 2016. Previously, he served as the Minister of Finance for the Federal Republic of Brazil, working with the president and government in reforming the world’s fifth largest economy.

In 2007, Levy was appointed as the Secretary of Finance of the state of Rio de Janeiro, leading the state to receive an investment-grade credit rating from Standard & Poor’s in early 2010.

From 2006, Levy was the Executive Vice President of Finance and Administration at the Inter-American Development Bank. In 2003, he was appointed as the Secretary of Brazil’s National Treasury. In 2001, he was appointed as the Chief Economist at the Brazilian Ministry of Planning, Budget & Management. He became the Deputy Secretary of Economic Policy at the Brazilian Finance Ministry in 2000.

Prior to Levy’s position as Visiting Economist at the European Central Bank from 1999 to 2000, he held several positions within the International Monetary Fund from 1992.