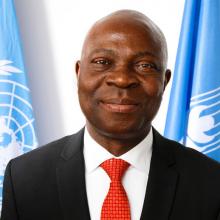 Gilbert F. Houngbo became the sixth President of the International Fund for Agricultural Development (IFAD) on 1 April 2017. Born and raised in rural Togo, Houngbo has spent more than 30 years working to improve the lives of some of the world’s most vulnerable people. He previously served as Deputy Director-General of the International Labour Organization (ILO) where he led field operations in more than 100 countries. From 2008-2012, he was Prime Minister of the Republic of Togo. He has also held numerous leadership positions at the United Nations Development Programme (UNDP).